Sailing into the Channel Islands

Everyones eyes were stretched up towards the underside of the Golden Gate Bridge. A perfect icon to be passing under as we prepared to open sails and let Sunpiper fly south. Suddenly there was a short quick breath that surfaced just off of our port side. Soon the whole boat was surrounded by small determined dorsal’s of harbour porpoises, playing in Sunpiper’s wake. A feeding frenzy of birds up ahead had hooked our attention. We kept our eyes keenly on the group of waterfowl diving, flying and competing fiercely for a gulp of fish. As anticipated the colossal back of a humpback broke through the surface. Everyone was up on deck now at the cry of enthusiasm that escaped my lips “WHALE!”

The sails were full and we clipped along at 5 knots as we left the protected San Francisco Bay and the feeding frenzy behind us. Ahead lay our first sunset against the backdrop of endless Pacific Ocean. It wasn’t long before we were nestled into a steady roll of swell. I looked around. Nobody had allowed their stomach to give in yet, but a greenish hue had fallen over the entire crews faces. As smells of dahl wafted up from the galley, no ones mouth began to water, but instead their faces went a deeper, more uncomfortable shade of green. Alison emerged from below, declaring that dinner was ready, but she would not be par-taking in the consuming of it. No one in fact was enticed by the offer, except myself. I later regretted the clearly far too ambitious move for a body not yet acclimatized to the rocking sea.

It took not one, not too, but three days at sea until we were all comfortably enjoying a meal together in the cockpit. We scarfed down the finest pasta each of us had claimed we had ever had. In the previous days crew members also reported that they had eaten the best granola bars and crackers known to man, as they were the only things that their bodies had received without reject.

Despite that lack of food consumed during the first couple of days at sea, our sails were always filled and night watches were composed of stars that danced across the milk way. During the days the crew was calm and resting within the walls of Sunpiper. It was a reassuring thought to think that Sunpiper had done this very route before. The sensation of not seeing land was not a common feeling for us, but knowing it was old news to Sunpiper made us sleep easier.

Our first landfall was set to be the Channel Islands. A chain of 8 Islands formed 14 million years ago, which is enough time to house both endemic species and subspecies, as well as 150 plant species, known only to the islands. The first Island within our sight was San Miguel. Its northern tip was being struck by golden evening light and its high cliffs peered down at us. Our jaws dropped as our eyes scanned the cliff faces, filled with tiny alcoves and arches, perfect hide away for nesting sea birds.

We made the turn into our first long anticipated anchorage. A few other boats were already nestled inside where we dropped the hook. At first everyone’s senses were overwhelmed. Suddenly there was the taste of earth, the smell of beach wrack, the contours of the island for our eyes to roll over, the sound of...seals...sea lions....NO!...It was the bark of Elephant Seals that filled our ears. More than a dozen of them sprawled out on the sandy beach in front of us. Two lumbered towards one another and began posturing. They swung their huge bulbous necks against one another, as they grunted aggressively. A few sleepy onlookers raised their heads slightly off the sand and grumbled as though, annoyed, their evening nap was being disturbed.

Everyone was entranced by the amount of life that surrounded us. Schools of fish, being chased by seals, pelicans and seabirds of all sorts dive bombing, the belching of elephant seals. We watched everything that was buzzing around us until it was too dark to see and our eyelids were too heavy. Everyone crawled into their births for a full night’s sleep.

It wasn’t at first day break, but it was morning when everyone emerged ready to explore. Our trusty Zodiac had recently been given the fitting name of “Zazu” who was ready for her moment to shine. We lowered her and she got filled with bodies eager to set foot on land. The kayak and surf board were also launched. The fleet paddled vigorously towards the breaking waves against the shore. As we approached it was clear this landing was going to take some skill. Skill which I certainly did not have as I got broad sided and tipped out of the kayak, I clambered to my feet, covered in sand and soaking wet. Sand beneath everyone’s feet was a welcome sensation. Soon everyone was busy draping boa kelp across their shoulders, digging in the sand, and gaping at strange succulents that hung in ribbons against rock faces.

From the beach, we began an ascent. Along the edge of the trail we stopped often to point out strange succulents and other unidentifiable plants with our knowledge. We noticed a strange plant, which Leo dubbed “baby arms”. It really did look as though chubby baby arms were grasping onto a dried-out tuff vegetation. It wasn’t long before small tracks grabbed our attention and people began to theorize what animal they could belong to. Suddenly Leo turned around sharply and shushed us. Against the dried grass was the auburn coat of a fox that shone. Its ears twitched in our direction but its focus lay ahead. We watched as it gingerly stalked and then pounced! Its victorious mouth emerged, full of shrew. We all looked at each other, eyes wide and mouths slightly open.

We clambered the hill side until the wind brought a chill and we decided to make our decent. At the bottom, a whole section of uncharted beach still awaited us. We walked the shoreline, littered with shells, feathers and bones. Tide pools filled with urchins, mussels and goosenecks were like little treasure chests. With our heads buried in shoreline discoveries we hadn’t noticed that Leo had wandered up into the dunes. He walked towards us waving things as large as his head. Abalone! The biggest abalone any of us had ever seen, bigger than any of us knew could even be possible.

“And there’s mountains of them!” Leo gasped.

We went to lay our eyes on this treasure trove of shells that Leo had found. Layers of bones, and shells, too many to wrap our heads around.

The magic of San Miguel began from the moment we were pushed onto its sandy shore. Our day was composed of discoveries that left us perplexed, views that left our eyes sparkling, and moments that were indescribable. How one island could muster so many novel discoveries was beyond us, but we scoured its beaches, trotted its trails and had our minds stretched a few new directions.

Sailing into the Channel Islands

This is my story aboard Sunpiper.

The Masts Are Back ! 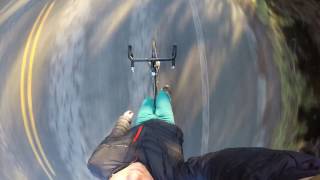 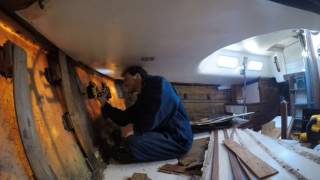 Giving Sunpiper A Make Over